Apps – A Waste of Money or an Expansion of the Brand? 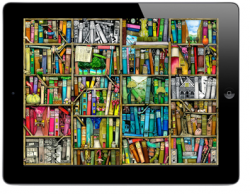 At the end of June this year, global publishing giant Hachette announced the acquisition of UK-based gaming studio Neon Play. According to Hachette’s CEO Tim Hely Hutchinson, the move formed part of a plan for the company to “diversify into the games market”, in addition to offering opportunities for their authors to be published across different formats and platforms.

This acquisition is particularly interesting on a number of different levels. It comes at a time when trade publishers have been forced to reassess their digital strategies having witnessed a dip in ebook sales. It also follows several years of naval gazing and debate on whether there is actually any value in pursuing app development at all. The acquisition is a bold move, and one which demonstrates a hunger and dedication to make digital innovation in publishing work, in spite of the naysayers.

The state of play

Apps offer publishers and authors a unique way of telling their stories and engaging with their audiences. They offer creative and interactive ways of bringing a story to life and creating content to reach consumers who are spending increasing amounts of time on tablet and mobile devices.

But while most trade publishers still produce apps, in some shape or form, and with varying degrees of frequency, the success rate is remarkably low. Typically $10-20k is side-lined to produce an app to complement a book/ebook launch, but very few will achieve a return on this investment, and most will make a spectacular loss. More often than not, this is the biggest gripe for publishers, who struggle to reap any commercial benefit whatsoever in such a costly, yet low margin, business.

Aside from the cost of design, development and delivery, marketing apps and achieving cut through in this crowded marketplace has perhaps been the steepest learning curve and challenge for publishers. Many have found that the rules which apply to promoting books simply don’t work in the app world and that a whole new level of understanding, knowledge and skills is required. Publishers subsequently find that they’ve thrown money and resources at apps and had very little to show for it.

So, why continue to invest in something that apparently doesn’t make commercial sense, and is more likely to fail than succeed? For some, it’s a case of ticking boxes, keeping up with the Joneses and doing what competitors are doing. For others, there is true belief and conviction that publishers should be experimenting with digital interactivity in this way, exploring different ways to make their content go further, reach new audiences and give readers something extra.

Some books translate well into apps, and others don’t, as many publishers have discovered through trial and error. They’ve had mixed fortunes when converting their most in-demand adult fiction titles to apps, discovering that a great deal of creative thinking, imagination and interactive features are required in order to captivate audiences. But over the years we’ve learnt that the most successful apps are often those which are tied to a popular celebrity or brand, which is why celebrity chef cookery apps or apps for such popular book/film franchises like “The Hunger Games” or “Divergent” series do so well. Storytelling apps and games which are tied to well-known children’s characters from books, like Peppa Pig, or the release of the Dr. Seuss apps through Oceanhouse Media in 2011, have also been particularly big hits. The common theme here is that the most downloaded apps are those which are developed alongside highly interactive and visual print books, and relate to a popular entertainment brand.

One would imagine that the Hachette-Neon Play deal will give the publisher a competitive edge in a number of areas, allowing it to become more experimental and playful with some of its content while bringing new skills to the workforce. But aside from these obvious benefits, the acquisition sends a clear signal that Hachette now considers itself more than just a publisher, but an entertainment provider.

Publishers are now expected to compete, not just with each other, but with all the entertainment streams vying for consumers’ attention – TV, film, music and games – and that attention is increasingly being directed towards mobile and tablet devices.  At Digital Book World’s Launch Kids Program in March, David Kleeman, Senior Vice President for Global Trends at the research consultancy Dubit, cited an average 2 to 15 hours of tablet usage per week. Kleeman said, “Kids are immersed in a content tsunami right now, drinking from a firehose.” Being in-tune with consumer demand and expectation, providing innovative, interactive content in the format consumers want, readily available for the devices they’re using, has never been more important.

While apps might not represent a significant revenue channel, they can, if produced and marketed successfully, offer something which enhances the overall reading experience for consumers, and give publishers a seat at the table of the feeding frenzy which is the world of entertainment.