Forget Kindles, mobile reading is all about the iPhone 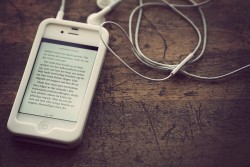 Today at the Frankfurt Book Fair, we’re taking a closer look at our Mobile Reading research at our event The Great Debate: How Much Money is in Mobile? And on the blog we’re exploring what devices consumers really use to read to eBooks.

According to our research of 2,000 British consumers the iPhone is the UK consumer’s top device for reading. 40% of people who read on smartphones do so on an Apple phone. Apple’s closest competitor in terms of mobile reading was Samsung, with a reading market share of 28%. HTC and Nokia were in third and fourth place respectively, with 7% of the market each.

These are interesting figures inasmuch as they give us a view of what consumers are reading on. More importantly, they also make it possible for us to compare the mobile reading segment of consumers with the broader market. This allows us to make a few intriguing extrapolations about who those readers are and what implications this has for publishers and booksellers: –

Broadly speaking this indicates that mobile book readers over-index on the Apple iOS devices and under-index on Android and Windows devices. From a consumer marketing point of view, this offers some clear advantages for publishers and booksellers.

iPhone owners are generally acknowledged to be a younger, wealthier and more highly educated group than those who own Samsung, HTC or LG Android phones. Some Comscore research published last year suggested that the median iPhone user in the US earned $85,000, and that the difference in earning power between an Apple and Android owner was as much as 40%. Not only do they earn more, iPhone users also spend more – seven times more, in fact – than Android users on apps and content.

Demographically speaking, iPhone users therefore map almost exactly to the profile of regular book readers identified last year by Pew Research. This painted a picture of heavy readers as being a group of people who are urban, college educated, earn over $75,000 a year and under the age of 50.

All this means that the iPhone audience is the reading audience. Apple’s device represents a ready-made opportunity for publishers and booksellers to sell content to a receptive audience that spends money on its phones.

If the publishing industry’s objective in investing in mobile is to reach its existing audience in new places and encourage them to buy more, then Apple’s iOS ecosystem is the place to be. If, however, it wants to grow the overall size of the book market and sell content to audiences who don’t currently buy books, it may have a bigger challenge on its hands in selling content to Android users.

Want to know more about the Mobile Reading research report? You can find the full findings here.