Have digital textbooks turned a corner? 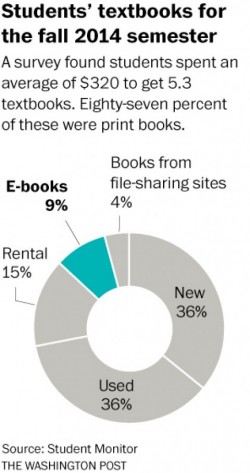 We've blogged numerous times about the prospects for digital textbooks. For some years now, e-textbooks have been the great hope for the future of a sector which, according to Outsell, was worth $13.7bn in the US alone in 2013. Textbooks are a very profitable business (the average US college student is estimated to spend up to $1200 a year on textbooks and other supplies), but the industry itself has long been singled out as ripe for disruption. Factors such as the high retail price of individual textbooks, which can cost up to $200, the vast grey market in secondhand textbooks and students' own growing reliance on laptops, tablets and smartphones have persuaded many companies to investigate digital or e-textbooks as a solution and propose new business models. The idea that access to learning materials could be provided 'as a service' facilitated through apps has persuaded numerous start-ups and established publishers to jump in and re-imagine the textbook. Until now the results for digital textbooks have not been promising. In late 2013 Kno, which was one of the earliest entrants, was sold to Intel for $20m in a deal widely acknowledged as a 'fire sale'. Another digital textbook company Inkling has also faced multiple uncertainties, laying off its entire consumer facing team last year and repositioned itself as a platform services provider to publishers. Yet there are now signs that digital textbooks are about to turn a corner. This week in the UK educational publisher J.S. Group released its latest set of financial results. These attributed 'significant growth' in sales of digital textbooks as a main cause behind its higher education business growing by 14.5% in the space of a year. Meanwhile the US-based online textbook rental service, Chegg, has just reported its first profits. It made $1.7 million net revenue in its last quarter, while announcing it had struck a deal to go 'digital-only', selling its physical textbook rental service to the infrastructure giant Ingram. On the investment side, Pearson (which also recently announced financial results) stated that it planned to invest $50 million in new digital products in 2015, while the digital textbook start-up RedShelf released news in January that it had secured an extra $1m to pursue its plans to roll out a digital textbook platform across US colleges. Later this year we will also know whether Blackwell Learning, the digital textbook platform that bookseller Blackwell launched in 2014 has succeeded in growing the market in the UK. The biggest challenge that these companies face in growing the digital textbook market is proving why they are better than their paper equivalent to the end user. In this respect there is still some way to go. Earlier this week The Washington Post published research that could make sobering reading for an entrepreneur attempting to prove the case that digital natives want digital textbooks. A survey conducted by Student Monitor found that 87% of the textbooks that students bought or rented were physical. Digital textbooks accounting for only 9% of textbook consumption, with the remaining 4% made up of pirated content downloaded from filesharing sites. Moreover, another study conducted by Washington University found that even when students were offered free of charge access to a textbook digitally, 25% of them still went out and bought a physical version of the same book. The news that digital textbook businesses are starting to edge into profitability is encouraging for the future of the sector. Without profits it will be difficult for start-ups and publishers to make a convincing case to invest in the research and development that will transform digital textbooks from curios to indispensable learning resources. And it is by innovating on what a digital textbook is, and making it sufficiently different and more useful than its paper equivalent that these companies will find a way to convince students that the time has come to go digital with their education.