Kindle is the king of mobile reading platforms, but iBooks is catching up – fast 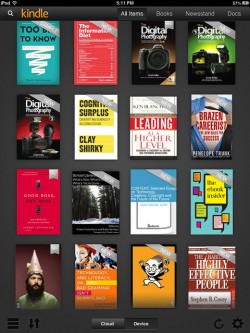 One consistent source of alarm within the publishing industry over eBook reading is Amazon Kindle’s apparent dominance of the market. Earlier this year we reported on Hachette revealing that Amazon accounted for 60% of its eBook sales in the US and 78% in the UK.

In our mobile reading research, which we unveiled this week at the Frankfurt Book Fair, we wanted to test the hypothesis that Amazon had an over-mighty position. So we asked the 2000 people we surveyed in the UK which e-reading platforms they used to read books on their mobiles.

The results were interesting in that while they revealed that Kindle does enjoy the largest share of the mobile reading market, readers have more omnivorous habits than we expected.

Our research challenged Hachette’s experience that Kindle is the only game in town, at least when it comes to reading on smartphones in the UK. According to our respondents, Kindle is used by 50% of mobile readers, while Apple’s iBooks is at 31%. The next nearest competitor is Kobo, which at 9% seems to be struggling to achieve cut-through in this territory, followed by Nook at 6%.

Given yesterday’s blog about the high demographic correlation between iPhone ownership and general disposition to read books, it makes perfect sense that iBooks should enjoy a strong second place. As the default e-reading app available to iPhone owners, iBooks would theoretically enjoys a significant advantage over its rivals on Apple devices and the results bear that out.

We also decided to break these results down by age group, as this was one of the chief markers as to whether someone was an iPhone reader or read on an Android device. This yielded some results with important implications for publishers.

We found that among 18-24 year old readers in UK, Kindle was ahead of Apple in terms of market share (41%), but only just. Of this audience, 39% of readers used iBooks. Among 24-35 year olds, Amazon maintained a larger lead (49% Kindle, 33% iBooks), but with Apple still representing a third of eBook sales within this market segment.

It was only when we started looking at significantly older audiences (55+) that Amazon’s lead appeared unassailable, with 59% of this audience using Kindle compared to 27% iBooks.

Yesterday we explored how consumers’ decisions to read on their mobile is determined by their handset. This data seems to suggest that a reader’s age is a very important factor in determining which e-reading ecosystem they will use on their phone. It also implies that publishers have a choice as well in terms of how they promote and market their books.

This data suggests that if you’re publishing books designed to appeal to an older audience then it’s a good idea to spend time and money marketing them on Kindle. If, however, you’re chasing a younger audience then it’s likely that you’ll achieve more cut-through marketing on the less crowded and more targeted iBooks platform.

Want to know more about the Mobile Reading research? You can see the full findings here.