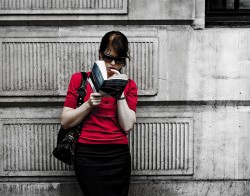 It might seem counter-intuitive, but the best way for book publishers to engage with digital natives could well be to focus on paper. New research that we've commissioned in the UK and US for Publishing Perspectives Designing Books For Millennials conference has revealed that young people on both sides of the Atlantic are avid readers, but overwhelmingly prefer print books to ebooks.

We surveyed 1,000 millennials (defined for the purpose of this study as people aged between 18 and 34 years old) in the US and a further 1,000 in the UK. We asked them detailed questions about their reading and media consumption habits. This study covered how millennials discovered, bought and read books, as well as how they chose to consume newspapers, magazines and their attitudes towards content subscription. The results were surprising, in that they highlighted that patterns of consumption for books differed significantly to other media. Over the coming weeks we'll be publishing a series of blogs looking at what this research tells us about the future of the content industries in general and books in particular. In this post we'll look at the study's headline findings, which told us print book habits were dying hard in a generation that has otherwise become fully digital in its media consumption habits. According to our research 79% of millennials in the US and 64% in the UK had read a print book in the last twelve months. Their digital reading habits looked very different, however. Only half (47%) of American millennials had read at least one ebook on a tablet in the past twelve months and just over a third (36%) had done so using a mobile phone. Millennials in the UK were less likely than their equivalents in the US to be regular readers. Just two thirds (64%) of British 18-34 year olds had read a print book in the past twelve months, while 28% had read an ebook via a tablet and 19% using a mobile phone. Not only did UK and US millennials spend more time reading print books than their digital equivalents, they also preferred buying them IRL (in real life) over ecommerce sites like Amazon. US Millennials also displayed highly heterodox habits when it came to acquiring print books to read. 52% of them said they "normally acquired" new books from chain bookstores, which put the likes of Barnes & Noble narrowly behind public libraries as an acquisition channel, which were used by 53% of respondents. By contrast only 40% of US Millennials said they normally bought new books using ecommerce websites such as Amazon, a full 5% behind secondhand bookstores, which 45% of respondents used as a normal way of buying new books. Chain bookstores were also very important for UK millennials when it came to buying books. 43% of British respondents said they "normally" used chains like Waterstones or WH Smiths as a source of new reads, compared to ecommerce channels such as Amazon, which were a normal acquisition channel for 38% of 18-34 year olds. Where the US and UK differed most markedly was in uptake of the public library system. Only 21% of British millennials used libraries as a source of new books to read. As we might also expect from these results, UK and US millennials also spent more on print than digital. 36% of US 18-34 year olds spent more on physical books than print books, with only 1.6% of them saying they had gone fully digital in buying only ebooks. The levels of  'digital only' millennial consumers was slightly higher in the UK, being the chosen route of 3.7% of respondents, but even then 23% said they spent more on print than digital. Taken at face value, these figures do paint the young people of the US and the UK as a conservative bunch: strongly attached to print, to physical bookshops and, in the case of American readers, to the public library system. Yet when we cast the net wider and look at other comparable studies, the findings for UK Millennials do seem to indicate they are broadly line with other age groups in their uptake of digital reading. A survey of British reading trends conducted by reading charity Booktrust in 2014, suggested that 29% of the UK public read ebooks in one form or another – just 1% ahead of 18-34 year old respondents to our study. A slightly different picture emerges in the US, where recent Pew Research Center figures show that 28% of the broader public read ebooks and nearly half (47%) of 18-29 year olds read at least one ebook a year. What these findings do suggest is that while there are clear similarities between UK and US Millennials' attitudes towards reading in general and ebooks in particular, there are also some significant differences. American Millennials are regular readers, they source books from multiple channels, including libraries and are also highly likely to read ebooks as well as print books. From the evidence of this survey, British millennials are much more likely to be less well-read.