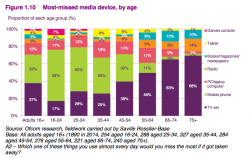 Like the demise of Mark Twain, it looks like the rumoured demise of e-readers as consumer devices has been greatly exaggerated – at least in the UK. The UK communications regulator, Ofcom, has just released its annual research report on British media consumption. This report shows that 28% of UK households now own an E-Reading device such as an Amazon Kindle – up 4 percent from last year. The news that dedicated reading device ownership continues to grow (albeit at a much slower rate than that of tablets and smartphones) turns at least some of the received ideas about ebooks and e-readers on their head. Since sales of reading devices slowed after the ‘Kindle Christmas’ of 2012 it has been widely assumed that e-readers would die out, replaced by the more versatile reading experience offered by tablets and smartphones. Ofcom’s research doesn’t offer any insight into why e-reading device sales are holding up, as it only tracks device ownership. Nor does it measure much time consumers spend reading on their e-readers, so it’s just possible that many of these devices aren’t used very regularly. Yet from the raw numbers it does appear that a large number of British readers like and value the e-reader experience enough to continue buying dedicated devices.

Even while it shows reading device ownership on the rise, Ofcom’s research also shows that reading itself is rapidly losing ground as a leisure activity – particularly among young people. When asked which ‘media device’ they would miss most, a mere 1% of 16-24 year olds said they couldn’t live without books, magazines and newspapers, compared to 12% among 65-74 year olds. Meanwhile 59% of 16-24 year olds said the device they would miss the most was their smartphone, followed a long way behind by the television at 17%. As we can see from the graph below, support for smartphones seems to taper away with the age of the respondent, just as the relative importance of books, newspapers and magazines grows. It’s a stark reminder of just how fundamentally media consumption now differs across the generations – and a clear indicator that mobile will soon eclipse the TV as the most important and influential media format.

While it would be right to look at these numbers and be concerned, we should be careful not to overstate its assessment on the importance of books and reading. The fairly simplistic way that Ofcom collects and presents this data means that it lacks nuance. We have no way of knowing, for example, how many people might have picked a smartphone as an essential device because that’s what they use to read books. It’s also possible that books might have been the second or third most importance ‘device’ category across several of these demographics. Nevertheless, what it does highlight is that when it comes to entertaining themselves in a moment of idleness, probably won’t pick up a book. They might not even turn on the TV. What they will almost certainly do, however, is look at their phones. And that’s both a threat and an opportunity for the content industries.