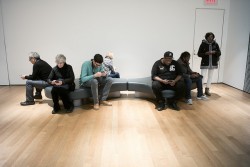 Let’s put that number into some context, starting with Deloitte UK’s estimate that there are currently 35 million smartphone users in the UK. If we assume that 44% of these smartphone owners read just one eBook on their phone (which is all our research asked to define a mobile reader) that’s equivalent to 15,400,000. Then, if Nielsen is correct when it says that 323 million books (print and digital) were sold in the UK in 2013, that means 4.7% of the total UK book market’s total output was read on a smartphone.

If we apply the same methodology to the US a similar picture emerges. According to our research 43% of US smartphone owners had read at least one eBook in the past year. Nielsen estimates that there are 171.5 million smartphone users in the US, so this is equivalent to 73.7 million eBooks. Then, if we accept the Association of American Publishers assessment that 2.32 billion books were sold in the US in 2013 that means 3.1% of all books sold were consumed on a mobile phone.

While it’s clearly not a majority activity just yet, two thirds (66%) of respondents who said they read books on their phones also said they did so more frequently now than a year ago. Mobile phone consumption of books is growing, and publishers and booksellers have the chance to capture some of that growth. As we’ll explore in future blogs, however, before it can grow, publishers, booksellers and reading platform providers need to overcome some serious objections to the reading experience they provide on mobile.

Ingenta’s full Mobile Reading research report is available to view on our website. Its headline findings were presented at the CONTEC Conference in Frankfurt today.