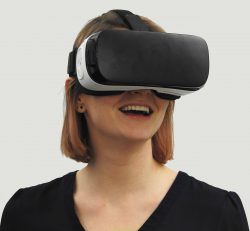 Futures made of virtual reality

Virtual reality (VR) is taking centre stage across the entertainment and news industries with everyone from The New York Times to major film companies finding a way to get involved in the game. At the beginning of the year Wired magazine predicted that 2016 would be the year VR spread from gaming into cinema, claiming that filmmakers would ramp up experimentation in VR innovation. When it comes to publishing, the industry has certainly been showing a keen interest in VR and its potential for bringing stories to life. A series of talks around VR at Frankfurt Book Fair, where it was one of the hot topics, showed us that the industry is at the very early stages of understanding the market.

In terms of deploying VR, very few have been brave enough to test the water, but educational publishers seem to be leading the way in this field. Earlier this year, Houghton Mifflin Harcourt partnered with Google to create virtual field trips for Google’s Expedition app. Using HMH science and social studies curricula, which includes teacher guides, lesson plans and student activities, these field trips help expand the classroom. Unfortunately, the cost of devices coupled with the lack of technological efficiency both for teachers and students alike limits widespread adoption.

VR certainly has it’s sceptics though. In a recent interview with Ted Hill, conference chair of Digital Book World, he stated that VR was hitting its peak in the “hype cycle” and is about to take a turn into the tough of disillusionment.

Only time will tell…

Missed out on the  Recipe for a Best Seller or The Robots Have Already Arrived? They’re still available on the Ingenta Blog.