Web services, not ebooks, are where Amazon is going to make serious money 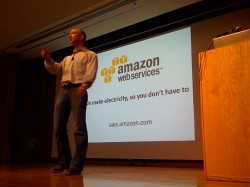 Last week Amazon surprised everyone who watches 'The Everything Store's' activities by releasing its latest set of financial results with a new addition. It chose to break out its revenues from Amazon Web Services, the cloud platform and services business that has powered everything from Twitter to Instagram in its time into its own reporting line. AWS is now only the third segment into which Amazon breaks its business, joining its North America and International ecommerce operations on the quarterly income statement. Why is this accounting decision big news? Firstly it's because AWS enjoyed a very good start to 2015, delivering $1.566bn of revenue in three months. Amazon CEO Jeff Bezos even declared that AWS was on track to become a $5bn business this year. Secondly the enthusiasm is due to the healthy operating margins that AWS achieved in the last quarter. These were 16.9% compared to the much slimmer 1.1% that the rest of the business made in the same period. The third reason why Amazon may have chosen to focus its enthusiasm on AWS is that the news from its more ecommerce activities isn't uniformly positive. Its North American ecommerce business continues to grow, with sales up 24% on the same quarter last year, but International ecommerce sales shrank by 2%. And it's sales of media (books, films, TV etc) that are performing worst. In North American media sales were up by only 5% in the last quarter, while they shrank by 12% internationally in the same period. It isn't clear why this might be the case. The way Amazon breaks out its North American and International revenues includes both conventional sales and subscriptions. This means it's not possible to say definitively that this slackening in growth of media sales is because fewer people are buying books or films, whether people are switching over from buying media outright to accessing it on demand (via Amazon Prime or Kindle Unlimited). Or then there's the third option: that people are choosing to buy other things instead. What is implied, however, is that the cost of selling media to consumers is becoming more expensive to Amazon, even as consumer demand for it seem to weaken. In the first quarter of 2014, Amazon spent $1.991bn on 'technology and content'. By the first quarter of this year, Amazon was spending $2.754bn in the same area, making it the fastest growing expense on Amazon's balance sheet. Given this background, separating out AWS figures so that they have their own profit and loss line in the accounts looks like a very timely move. Reporting the strong performance of its web services business isn't just Amazon saying 'we built this business and it works'. It also sends a signal to the market that Amazon has a 'Plan B' if, as it appears, its growth in ecommerce slows. Perhaps the strongest signal that Amazon could be seeing its path to profitability in services rather than stuff is buried in a part of the statement called 'Additions to unearned income'. This part of the report refers to monies that Amazon earns from customers in advance of providing services. This can refer both to the services that AWS provides to businesses, which are typically bought on an annual basis, or to consumer services bought on an upfront basis, such as Amazon Prime. Together these accounted for $1.803bn in income in the first quarter of 2015, up from $1.092 in the same quarter of 2014. In any event the strategy worked like a charm with Wall Street, sending Amazon shares to an all-time high on Friday 24 April. Even if Amazon doesn't become the 'Everything Store' it can at least say to the market that web services provide a path for it becoming the Every Platform store some time in the future.