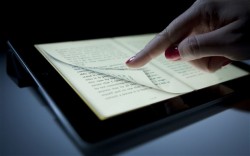 New research on worldwide consumption of ebooks from Nielsen suggests that we could be at the end of the period of explosive growth for digital reading, as year-on-year sales fell for the first time. Nielsen’s new "Understanding the E-Book Consumer" for July 2013, which is based on data from the Kantar World Panel, also contains some better news for proponents of digital reading. It predicts that ebooks will overtake sales of print books in 2014, with total sales expected to rise to 47 million units. This will put total ebook sales 300,000 ahead of their print equivalents and mean that electronic books account for 48% of the overall fiction market. Away from the predictions, those parts of Nielsen Kantar’s report that are based on historic data show a more mixed picture for publishers. Sales of ebooks fell for the third consecutive month in April 2013, showing a (very slight) year-on-year decline of 0.1% - the first time such a thing has been recorded in this market. Nielsen attributes this slowdown to the lack of a star performing title in children’s and young adult publishing in 2013 to replicate the success that Suzanne Collins’ The Hunger Games trilogy enjoyed last year. Nielsen’s data for the UK market mirrors recent statistics published by the Association of American Publishers in early July. This reported that the days of double or even triple digit growth for the market might now be gone, with ebook sales growing by only 5% to $393.6 million in the first quarter of 2013. It also suggested that the huge success of The Hunger Games in 2012 may have been a one-off event that helped to skew expectations of the market this year. As ebook sales look set to take just under half of the total fiction market in the UK and more than a fifth (22%) of the overall UK book market, according to recent Bowker Market Research, it is only natural that the rate of growth would slow. As the overall market for ebooks gets bigger, publishers will need to sell ever greater volumes of ebooks in order to report significant growth, which is harder to achieve in a larger market. What these results do indicate very strongly, however, is the impact that just one runaway hit can have on moving the publishing market on both sides of the Atlantic, and the ultimate importance that blockbuster book sales still have to publishers’ bottom lines.